Also, I'd wrote two post - here & here, tried to show how to write a physical hardware driver for Kernel space, but the program is also a loadable module and need or will load after the kernel is live with filesystem.

But as I've said earlier, while engaged with an embedded system, there are comparatively requirements of these work, rather you want to have your all driver, and driver program inside the Kernel binary (uImage / zImage) and let Kernel do those stuff at booting.


Well, its just not difficult, and quite easy. What I've done by myself is,

at the end of the Makefile.

Then compile the full kernel and generated zImage transferred to sd-card. While booting, just after USB HID core driver, I am able to see my custom message from hello_world printk(). As,

And if loading module function is absolutely not in any requirement, just remove it from Kernel build .config. 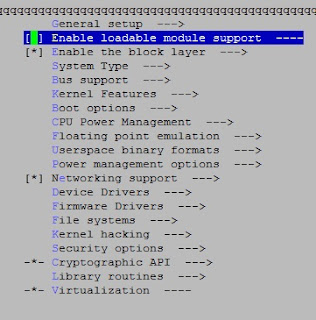 It also possible just by unselect from #make menuconfig
Posted by Fail better!!! at 2:02 AM